The Engines that Power CAD Software

There are software companies who toil in the background, content to remain largely anonymous, but without whom our CAD/CAM/CAE industry would collapse. They can afford to fly under the radar because they don’t need to market to the wider design audience – just to CAD vendors. These are the firms that quietly write programming toolkits, translators, kernels and even complete programs.

Programming toolkits (aka SDKs, software development kits), for example, make it possible to read, display, edit and write CAD objects. The most popular ones are for objects defined by Autodesk’s near-universal DWG format, along with Adobe’s 2D/3D PDF and neutral formats like IFC and JT.

Translators let CAD programs read and write files from competitors and from standardized formats. If a CAD program cannot directly read object data from a DWG file, for example, then the next best thing is to translate it into something the CAD program can read. Examples include proprietary file formats used by Solidworks and Creo, as well as formats defined by standards organizations, such as STEP and IGES.

At a deeper level, kernels do the grunt work of defining 2D and 3D geometry, surface and solid models, and how objects interact. Whether you fillet two lines or Boolean-ize two solids, it’s the kernel performing calculations to come up with a correct result. Kernel vendors also provide advanced technology like collision detection and parametric constraints.

Complete programs let you sell a CAD program as “your own,” with your company’s logo. These are sometimes known as OEMs (original equipment manufacturers), including common ones such as IntelliCAD, AutoCAD OEM and ARES. Other vendors provide OEM rendering and analysis programs that run inside the CAD program or link to it externally. 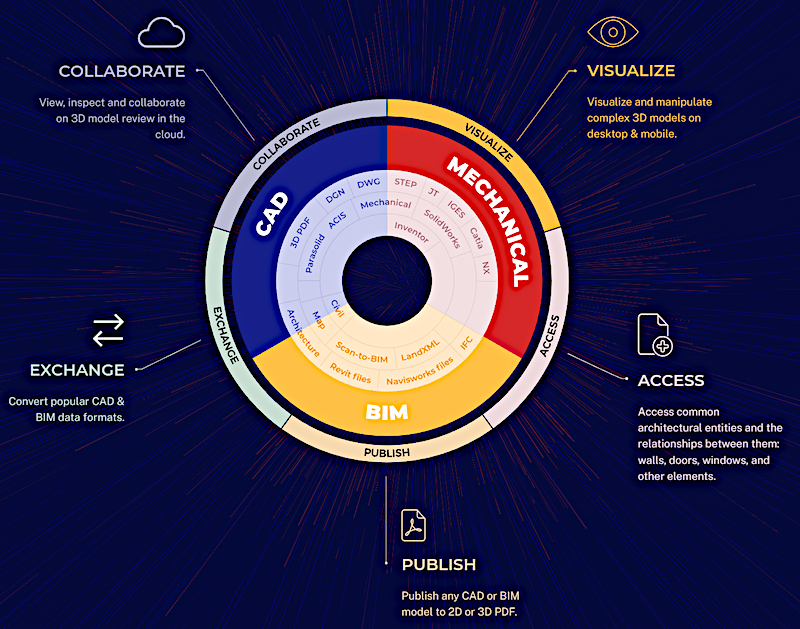 One such vendor, the Open Design Alliance (ODA), is an oddity, in that it doesn’t exist to make a profit. It was formed as a non-profit entity in 1998 to promote the use of DWG in non-Autodesk programs. And it has been wildly successful, now with 1,200 member companies. In recent years, it has branched out to provide APIs that access data in PRC/PDF, MicroStation DGN, IFC (industry foundation class) and Revit, STEP, LandXML, Navisworks, Scan-to-BIM, and so on.

To inform its members on its progress and plans for the future, the organization hosts the annual ODA Summit in September. With COVID, the online version of the conference has become a fire hose of information, cramming what used to be a full day into 1.5 hours. What I hear there is what your CAD package might do next year, which makes for interesting listening.

ODA for Mechanical CAD
With ODA’s origin in DWG, this meant it first targeted general CAD software. A decade ago, it branched into architectural software by writing APIs for accessing files made by Architectural Desktop, Revit, and the IFC standard.

The major news from this year’s September conference was the announcement that the ODA is going whole-hog into MCAD. ODA President, Neil Peterson, revealed that the organization plans to eventually support all major 3D proprietary formats, like Catia, NX, Solidworks and Inventor. It already supports 2D AutoCAD Mechanical, 3D Mechanical Desktop, IGES, JT and STEP files.

The work will hopefully begin in January, the ODA said. These initiatives take years of programming, usually in the order of first reading files, and then displaying them. ODA has no plans to write proprietary MCAD formats. Also, not all objects will be supported right away, as we see with Revit where more objects are supported each year, never mind keeping up with Autodesk’s changes to the RVT and RFA formats.

But what about Autodesk legacy, such as AutoCAD Architectural and Mechanical? Autodesk may have abandoned them long ago, but drawings haven’t; “millions” still exist and need to be updated from time to time.

One of the unspoken embarrassments of the CAD world is that drawings need to be readable sometimes decades later; yearly software updates are the enemy of permanence. Companies like Boeing treat the problem very seriously; they expect their B-52 bomber, for instance, to have a hundred-year lifespan. Same for builders of ships, processing plants and nuclear reactors.

As a result, the ODA offers 100-year legacy support for any CAD vendor, and already is the official maintainer of the DGN format on behalf of Bentley Systems. On the list are DWG, Revit, PRC/PDF, and DGN. As well, it works closely with BuildingSmart on developing future releases of IFCs and with PDES on the STEP format. STEP makes sense, because it is the IFC of mechanical drawings, an international standard becoming more capable as it handles more and more aspects of CAD and CAM.

The ODA can make the promise of 100-year-support, because the organization can’t be acquired and shut down by a hostile firm; only its members can dissolve it, and that is not in their self-interest. “Actually, the goal is to keep the organization going for 100-200 years,” Peterson told me.

New To the DWG API
Also new this year: The DWG API will gain a constraints engine. It is currently in beta but will be available to member companies by the end of this year, the ODA says.

Model documentation (which is semi-automatically generating 2D drawing views linked to 3D models) is not new to the API, but what is new is saving drawing views in a format compatible with AutoCAD. This means that AutoCAD can read what, for example, a BricsCAD or IntelliCAD generates. To do this, the ODA had to implement some Inventor functions, because that’s what AutoCAD does.

How the ODA Works
The ODA funds programming in two ways. Most of it comes from annual fees, which start at $2,400 for for-profit entities and gives member companies access to most of the APIs, ones considered core to the ODA, like DWG, DGN and PDF.

Then there are other file formats that the ODA doesn’t feel the entire membership would benefit from, and so it allows side projects. The SIG (special interest group) program lets a group of companies cooperatively fund and work together on a project. This is how Revit and Navisworks translation got started, and is how the latest SIG, Scan to BIM, got launched. In these cases, if you want access to Revit APIs, you become a member of the SIG, which is an extra $5,000 a year. The new proprietary mechanical format initiative is also being done through an SIG.

I don’t think existing translation firms that handle MCAD formats are quaking in their shoes from the ODA announcement. They have decades experience delving into the mysteries of Catia and other formats, and it will take the ODA a year or more to ship an initial API, with years of updates to follow. That, and the ODA price is not low, ranging from $13,600 to $24,400 annually, depending on the access a SIG member desires, albeit with no royalty payments.

As much as open software advocates would prefer the industry to follow their wishes for freedom from corporate lock-in, “open standards are not displacing proprietary standards; rather they are complimenting each other,” says Peterson. So, users want tools that work with both approaches, which is why the ODA is working towards producing universal viewers and data access for “any engineering format.”
www.opendesign.com

Ralph Grabowski writes on the CAD industry on his WorldCAD Access blog (www. worldcadaccess.com) and has authored numerous articles and books on CAD and other design software applications.