Whale of an Idea - Design Engineering

Whale of an Idea 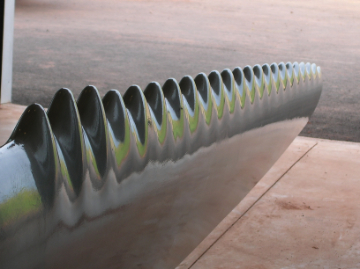 Until it was replaced by petroleum in the late 1800s, whale oil was harvested in the millions of gallons for lamp fuel, to make candles and lubricate industrial machines. A century later, a Toronto-based company is again looking to the whale to not only generate energy but also conserve it. This time, however, the whale’s contribution is limited to the unusual geometry of the Humpback’s pectoral fins. In contrast to other whales and dolphins that have a smooth, streamlined leading edge to their fins, the Humpback developed large round bumps or tubercles that protrude from the front of its fin, giving it a serrated edge.

WhalePower developed and markets an airfoil design that incorporates these tubercles to fashion what the company claims is the next evolution in airfoil technology. According to Stephen Dewar, WhalePower co-founder and the company’s director of R&D, their design produces greater lift, creates less drag, stalls at a high angle of attack and is nearly silent. Still, he says, gaining acceptance of the radical concept has been a difficult process.

“At first, engineers and scientist in fluid dynamics ‘knew’ our design couldn’t work, even when presented with hard evidence,” Dewar says. “It’s taken a long time to penetrate people’s minds that this is not just a new design but new science.”

A million years of design iteration
It’s understandable that WhalePower’s design would be hard to accept. Since the beginning of wing design, airfoils were assumed to require a smooth leading edge. However, the Humpback fin is essentially a “wing” that helps the large mammal glide through the water and make the sharp turns needed to catch its pray. But for a 16-meter-long, 80,000-pound animal to be nimble, even in water, requires a hyper-efficient wing that won’t stall (i.e. drastically lose lift), even at extreme angles of attack. It was this counter-intuitive wing design that caught the eye of biology professor Dr. Frank E. Fish, now WhalePower’s president. While shopping for a gift, he noticed a sculpture of a Humpback fin. As the director of the Liquid Life Lab at West Chester University of Pennsylvania, and an expert in biomechanics, he assumed the artist had mistakenly put the tubercles on the wrong side of the fin. After confirming that the sculpture was anatomically correct, he began questioning what possible use the bumps could have.

To answer that question, Dr. Fish teamed up with colleague Laurens Howle, a mechanical engineering professor at the Pratt School of Engineering at Duke University and an expert in fluid dynamics, as well as researchers at the U.S. Naval Academy. Using cross-sections of whale fins, the research team created idealized blade models for testing in a wind tunnel. Reported in the May 2004 issue of Physics of Fluids, the study found that the Humpback-inspired blade produced 32 percent less drag and an 8 percent improvement in lift compared to the smooth leading-edge flipper found on other whales and dolphins.

Encouraged by the results of their study, the pair teamed up with Dewar and established WhalePower to commercialize the design. The company’s first target market was blades for wind turbines. To prove the concept, the company approached the Wind Energy Institute of Canada (WEICan) to test its Tubercles Technology at the institute’s North Cape, Prince Edward Island site. For six months, the unique blades were run on a Wenvor Technologies 25 Kilowatt turbine with a 10-meter span. According to WhalePower, the results, published in January 2009, showed a 20 percent increase in annual energy production compared to conventional turbine blades.

What’s in a fin?
The science behind whale tubercles is as curious as the fins themselves. In their investigations, Fish and Howle discovered that rather than blocking airflow, the tubercles funnel it through the channels between the bumps. This, in turn, creates a Venturi effect, a phenomenon that causes the velocity of a fluid to increase as it passes through a constricted space. As a result, the constricted fluid’s pressure drops, due to the law of conservation of energy. Tubercles on the leading edge of WhalePpower's airfoil funnel airflow between the bumps which creates vortices that increase lift while reducing drag and tip stall.

“What gets interesting is that if you shape the tubercles properly, almost all of the airflow coming to the fan blade goes through those channels,” Dewar says. “This produces vortices behind the channel which are what attaches the boundary layer of air to the airfoil and increases lift.”

Additionally, he says, that increased flow attachment allows a tubercle wing or fan blade to reach a much steeper angle of attack—the pitch of the blades relative to the incoming air—before it suffers from stall and heavy drag. To illustrate, if a conventional airfoil is angled beyond 15 degrees, the topside of the wing or blade will begin losing airflow attachment and the wing’s lift efficiency will plummet (i.e. stall). With the tubercle design, Dewar says, the critical angle of attack increases to as much as 31 degrees. This means that a tubercle turbine blade can be set to the steeper angle which, in turn, provides a higher lift coefficient. As a result, it can begin generating power at a lower wind speed. Similarly, a tubercle fan blade moves more air per rotation.

Finally, he says an unexpected benefit of a tubercle fan blade is that it’s less noisy. “Whenever you put a blade on a rotating platform like a turbine, the speed at the tip is much greater than that at the core,” he explains. “In that environment, it’s very common to have some airflow detach from the surface of the blade; centrifugal force then pushes it out to the tip where it destabilizes lift and creates tip stall. This not only throws away power but also causes extra drag and vibration at the tip disproportionate to the rest of the blade. This vibration is what makes wind turbines, or any kind of fan, noisy.”

By contrast, Dewar says tubercles “catch” that spanwise airflow and re-channels it over the surface of the blade, thereby decreasing tip stall and vibration noise without increasing drag.

A Whale of an Opportunity
The first company to adapt WhalePower’s technology was Seaforth, ON-based Envira-North, Canada’s largest manufacturer of high flow, low speed industrial ceiling fans, who licensed the tubercle technology for its Altra-Air HVLS line. The company’s fans range in diameter from 8 to 24 feet and are typically installed in large open spaces such as warehouses, distribution centers and arenas. Ontario’s Envira-North licensed WhalePower’s tubercle technology for its Altra-Air fan line. Future applications may include everything from wind turbines to computer fans (left).

According to Joan Wood, sales coordinator for Envira-North, the WhalePower design lead to a ceiling fan that moves 20 percent more air using half as many blades as its previous models while consuming less energy. “Because of the efficiency of the blades, our fans can be run at a slower speed,” she says. “That translates to about 20 percent less energy required to move more air than a conventional fan.”

The implications of the Humpback-inspired design could be enormous, says Dewar, considering that fans are an essential component in everything from computers and microwaves to compressors, turbines and HVAC systems. While the size of the global fan market is hard to determine, Dewar says saving between 20 to 30 percent in power consumption, were WhalePower’s fan blade design to become standard, could have a huge cumulative effect on energy consumption world-wide.

“Look at the computer industry alone” he says. “If you put together all the desktop computers and servers in the U.S., they consume 5 percent of the country’s total electrical generating capacity. That’s 50 million MWh, 60 percent of which goes to power the fans and ventilation. Imagine if we could cut that consumption by even 5 percent let alone 20 percent.”
www.whalepower.com