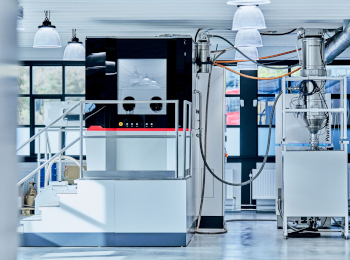 UK-based launch services firm, Orbex, announced the installation of a custom made AMCM M4K 3D printer the company will use to additively manufacture its mono-body rocket engines and turbopumps in-house. Since 2018, the company has been 3D print its rocket engines, which Orbex says are the world’s largest monobody engines as well as the most ecologically sensitive.

AMCM’s 3D printer features a large z-axis and is currently the largest high precision metal 3D printer available in Europe, Orbex says. With the one-of-a-kind printer, Orbex says it can print full main stage rocket engines in a single run, which reduces the engine’s overall mass and eliminates having to join smaller sections with welds, bolts or flanges.

Despite it’s high 40-micron resolution, the four-laser system printer is also relatively fast, producing a mono-body engine in a few days of continuous printing, Orbex says. In addition to the M4K, the company also installed a Solukon SFM-AT1000-S de-powdering machine to remove un-sintered superalloy powders from the engine parts after production.

Headquartered in Scotland, Orbex specializes in the small satellite industry. The company claims its Prime micro-launch vehicle is the most eco-friendly in the world. Rather than traditional highly refined kerosene fuel like RP-1, Prime burns BioLPG, a propane fuel produced from renewable feedstocks. According to a University of Exeter study, a single Orbex Prime launch would produce up to 86 per cent less emissions than a similar-sized vertical launch vehicle powered by fossil fuels.
https://orbex.space
Advertisement