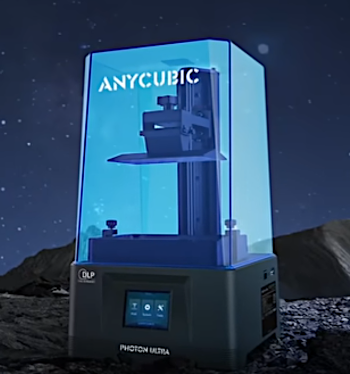 Anycubic announced that its Photon Ultra DLP 3D printer will launch on Kickstarter in September. Equipped with Texas Instrument’s latest DLP technology, the DLP printer is rated at 720p, but produces quality better than that of 2k/4k monochrome LCD screen printers, the company says. This is because DLP printers use a projector that reflects all the light to a pixel via a micromirror, which produces crisper black-white contrasts. In addition, the Photon Ultra’s internal projector can be used for more than 20,000 hours, unlike LCD printers which require that screens be regularly replaced. The unit has a print speed of about 1.5s per layer and features 16x anti-aliasing to reduce layer lines and post-processing time. The Photon Ultra also has options for adjustable UV power, to suit a range of resins, and comes with a laser engraved print bed to improve platform adhesion and evenness.
www.anycubic.com