Three different products are being launched in North America between September 10-15—the UR3e, UR5e and UR10e—kicking off Universal Robots ecosystem UR+. 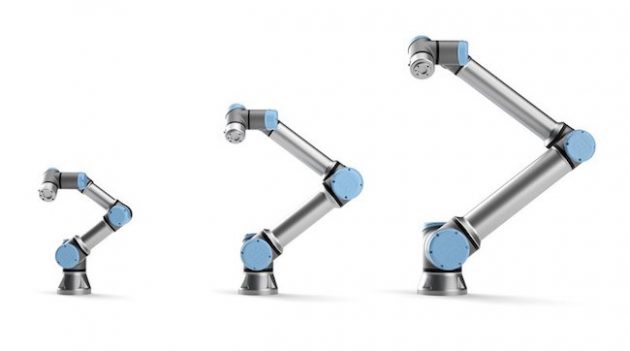 the inclusion of a new torque sensor on the e-Series, ready to take on required applications right out of the box

On the Monday of the International Manufacturing Technology Show (IMTS) Universal Robotics held a press conference to discuss the official launch of their e-Series collaborative robot.

Tight and succinct, the press conference covered a lot of ground in a short amount of time. One of the biggest pieces of info to come from the event was the inclusion of a new torque sensor on the e-Series, ready to take on required applications right out of the box such as “sanding, buffing, polishing and deburring where force-feedback is paramount in order to obtain uniform results.”

With three different products being launched in North America between September 10-15—the UR3e, UR5e and UR10e—Universal Robots is looking to create an ecosystem that offers multiple solutions to client problems/situations with its UR+ platform. 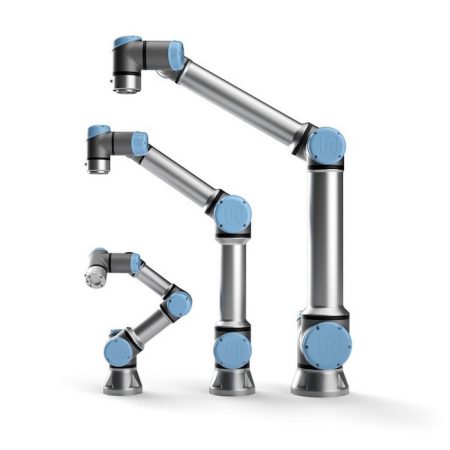 The e-Series also has a repeatability factor of 30 microns (0.03mm) in the UR3e and UR5e models and 50 microns (0.05) in the UR10e. While the robot arms come with a lightweight, wide-screen teach pendant, that simplifies functions down to a few clicks, advanced users wanting more from their product also have access to an externally accessible 500Hz system bus to implement more complex motion control algorithms or profiles, such as advanced machine vision applications.

The user interface also includes the ability to program stopping time and stopping distance for protective stops. This  greatly reduces the complexity and uncertainty involved in performing pre-deployment risk assessments. All 17 safety functions are certified by TÜV Nord and comply with the latest ISO machinery safety standards for unobstructed human-robot collaboration.

According to Universal Robots, the e-Series now supports up to 2A of peak current through it’s platform tool power supply. The new cobot line also adds four additional digital inputs with an associated interface for use with conveyor tracking. Additionally,  a new wrist-joint-tool communication interface reduces production line integration time and the hassle associated with routing cables between the end-effector and control cabinet. All joints are field replaceable in under six minutes