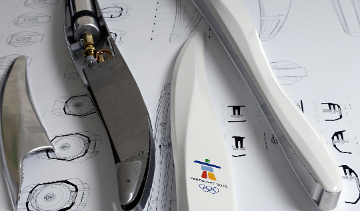 In 2007, when the Vancouver Organizing Committee (VANOC) chose Bombardier Aerospace to design and build the now iconic torch for the 2010 Olympic and Paralympic Winter Games, the engineers knew they were on a fairly tight deadline. To be ready for the start of the October 2009 torch relay, the company had to fabricate and hand assemble more the 12,000 torches for each torchbearer in the 45,000-kilometre journey.

Before that, of course, the company’s team of industrial designers and engineers would have to sculpt a uniquely Canadian design from scratch, devise a one-of-a-kind burner system that would stay lit in arctic temperatures and extensively test the mechanism before any construction could begin.

While that may seem like child’s play for a team of engineers accustomed to developing something as complex as a commercial aircraft, there are no industry standards or cumulative engineering knowledge for torch design. Other than taking apart past Olympic torches to glean some design insight, the team was on a make-it-up-as-you-go-along race to the relay’s starting line.

Accustomed to mission critical time lines, the company made its production targets on time but there was one stakeholder who wasn’t factored into the overall project, says Vincent Laithier, sales director of Montreal-based additive manufacturing service bureau, Axis Prototypes.

“[Bombardier] was under pressure from major sponsors, like RBC and Coke, to get the first torches done as quickly as possible, so they could showcase the torches in their Olympic ad campaigns,” he recalls. “At the time, [Bombardier] was having some backlog with the moulds of the real torches, so they had us rapid prototype the entire casing except for the internal metal parts.”

“At that time, we had just started using a new fire-retardant SLS material that meets the Federal Aviation Regulation (FAR) 25.853 standard, meaning it’s self-extinguishing and doesn’t emit smoke or produce toxicity when it burns,” Laithier says. “With the SLS material, we incorporated the burning mechanism and worked with Bombardier’s engineers on a daily basis to get the display prototypes to a functional state.”

In addition, the 3D prototyped torches also had to be indistinguishable from the real thing, especially considering the multi-million-dollar ad campaigns and exacting standards of the International Olympic Committee. To create an exact facsimile, Axis plated some of the plastic internal components to look like brushed aluminum; applied automotive paint color-matched to the exact Pantone hue and affixed the final production decals.

“It was a big home run for us,” Laithier says. “People were running with them, lighting them and acting like they were the real thing, but nobody knew the torches they were working with were 3D printed.”

“That is a major value add that we bring to our customers,” he adds. “Not everyone can finish, color match and apply decals and such to make a product—whether its an Olympic torch, the bumper for a car or a bike frame—to look so much like real thing, you can’t tell the difference.”
www.axisproto.com