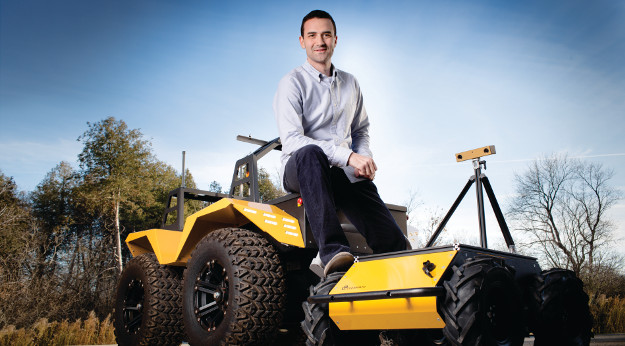 The Business Development Bank of Canada (BDC) has selected Clearpath Robotics CEO Matt Rendall, and his proposed material-handling robotic project, to represent Ontario as a finalist in the 2015 BDC Young Entrepreneur Award. Created in 1988, the contest rewards promising Canadian entrepreneurs between 18 and 35 years of age. Ten finalists were selected to compete for a $100,000 grand prize.

Clearpath is best known for its terrestrial Grizzly and aquatic Kingfisher drones that have proved popular with environmental engineering companies and research institutions. However, Rendall says winning the award’s top spot will help the company venture in a new direction by funding the development of three new autonomous mobile robots, or AMRs, to move materials in warehouses. Similar in concept to the ADAM robot system developed by Grimsby, ON’s RMT Robotics, Clearpath’s autonomous mobile robots will function like driverless robotic forklifts, delivering materials from one location to another, while safely operating around humans and unexpected obstacles.

“Robotics is really about intelligent automation that can help industrial companies and manufacturers improve productivity, by producing more and doing so in a more effective way that streamlines their operations,” Rendall says. “For Canada, we really see this as a way for companies to position their brand by saying, ‘I manufacture in Canada,’ and to create more high-value jobs.”

Open to the general public, voting for the 2015 BDC Young Entrepreneur Award contest runs from June 3 to June 17. To support a project, voters can log onto the contest microsite and vote once a day. The BDC Young Entrepreneur Award winner and runner-up will be announced on June 22. The runner-up will receive $25,000 in consulting services.
www.bdc.ca/yea
www.clearpathrobotics.com